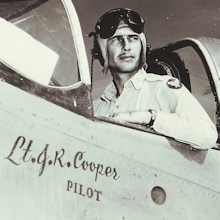 Randall Cooper was born in the community of Pleasant Valley outside of Garland in 1916. He was the 6th child of 12 children born to Boone and Mabel Cooper. He attended several different schools including one year at Garland High School. When he was 17 years old, he went to the San Angelo area to work on a ranch. During the depression years he worked for his future brother-in-law in the house moving business, including moving several buildings in preparation for the Texas Centennial celebration at Fair Park. He learned about the concrete business while moving houses and other buildings.

On May 23, 1941, Randall married Winona, the sister-in-law of his employer, Homer Gardner. The Monday after the attack on Pearl Harbor, he started work at Southern Aircraft (later Intercontinental Manufacturing and now General Dynamics). He then volunteered to serve in the Army Air Corps and qualified to train as a pilot. He was commissioned as an officer and flew P-40's and P-51's in the Pacific during World War II. He flew over 100 combat missions and was a member of 82nd Tactical Reconnaissance Squadron of the 71st Tactical Reconnaissance Group. He was awarded the Distinguished Flying Cross, Purple Heart, and Air Medal with 4 Oak Leaf Clusters. He has the dubious distinction of surviving 3 separate air crashes. One mission of particular note occurred when he led an element of a flight that discovered a Japanese ship convoy near the Philippines. While on a strafing run he was shot down by Japanese anti-aircraft fire. He parachuted into the ocean and paddled his life raft ashore to the Japanese controlled island. He hid overnight on the island and the next morning made contact with some Philippine natives. He was rescued that day by American forces in an operation mounted under tremendous Japanese fire. Randall provided Army intelligence with information regarding enemy placements on the island and was awarded the Distinguished Flying Cross for gallantry above and beyond the call of duty. This operation occurred seven days after his first son was born. Randall exemplified the best traditions of the American citizen soldier by serving with honor when needed and returning to normal life when the job was done.

After World War II, Randall continued in the house moving business until 1947 when he founded Cooper Concrete Co. Starting as a concrete contractor, he worked out of his home on 15th Street in Garland until 1952. That year he became one of the first ready mix concrete suppliers in the area with the purchase of three 3 cubic yard mixer trucks. Cooper Concrete also moved to 5th Street, just north of downtown Garland. As the business grew, Randall was joined by several of his brothers and other relatives in the business. In 1964, the concrete contracting business was split off to a separate company, Garland Concrete. Randall was innovative in recognizing several construction trends and filling a niche in the local industry. He was also ahead of his time in hiring and promoting minority employees, including involving them as partners in the companies he founded. His business dealings have always been signified by integrity, fairness, kindness, and loyalty.

Randall has served his church, First United Methodist, as an active member of his Sunday School class and service on the Administrative Board. He established the Grady Cooper Scholarship Fund in honor of the memory of his brother Grady, a children’s Sunday School teacher at FUMC. Over 200 college students have advanced their educations through the help of the scholarship funds. Despite never attending college himself, Randall has always been concerned that young people live up to their full potential by receiving the best education possible.

Randall is a past president of the Garland Rotary Club, a Paul Harris Fellow, and sang in the Rotary Chorus. He has served on the board of the Garland Chamber of Commerce and several community boards and committees. He and several relatives made the largest single park land donation in City of Garland history. He coached and sponsored Little League baseball teams. He and Winona were active supporters of their children’s Boy Scout and Camp Fire Girl activities.

Perhaps the most important characteristic of Randall’s life was his devotion to his wife Winona for 55 years until her death in 1997.

The following is the journal of M/Sgt. W.E. Ursprung of the 71st TRG. Copies of the journal were given to members of the 71st at one of their reunions. It is an incredible day to day account of World War II in the Pacific.

Seventy-first Group left Laurel, Mississippi, September 23, 1943, - arrived Camp Patrick Henry, Virginia, on September 25, 1943. While at Camp Patrick Henry, we were completely outfitted with heavy winter gear. The Chief and armourers were equipped with tools. We boarded troop train on October 6th, and rode to the docks at Hampton Rhodes, Virginia. -there we boarded the USS General John Pope, a new twin-screw ship making her maiden voyage. Everyone figured with the winter gear, that we were headed for Europe. After sailing three days, we woke up the morning of October 9th and realized the ship was not moving. Everyone went topside and found that we were anchored at San Cristobal, Panama. It was then we realized we were going to the Pacific.

We passed thru the Panama Canal on October 10, 1943. We crossed the equator on October 13th, crossed the International Dateline on October 24th. We docked at Brisbane, Australia, on October 29th -took on additional supplies and troops and sailed from Brisbane that night.